Born at home on May 29th, 1930 in New Castle, Delaware, he is the son of the late William Edward Cathell and Anna Virginia Cathell (Schultz).  Brother Bill has undertaken many pursuits in his lifetime. He joined the Army in 1948 and served as a Ski Trooper. He was an electrician and plumber. He owned and operated Home Comfort oil company. He received his Bachelor of Science in Auditory from the University of Eastern Florida in 1962 and was a hearing aid specialist. He founded the business C.J. Cathell Enterprises with his wife, Carolyn, under which many of his pursuits were conducted including vacuum cleaner sales in Delaware and Virginia and the tax preparation company that they originally started together at their home on Parksley Road. The tax company later opened its well known location at the Cathell apartment complex in Parksley.

Brother Bill was Ordained to the ministry on May 31st, 1967 by The United Christian Church & Ministerial Association. He was a youth pastor for New Castle Baptist Church in Delaware. He built and founded the Pine Cove Mission Church in Felton, Delaware that had a Sunday radio broadcast. Also, he served as chaplain at the Delaware State Hospital.  Brother Bill stepped away from the ministry in the early 1970's due to poor health, but he has never been able to stay away from the Lord's work for long.

Brother Bill returned to the ministry as Pastor of the Church of God in Felton, Delaware for a couple of years in the early 1980's before "retiring" in 1983 and moving to Parksley, Virginia.  He fully intended to stay retired.  He even visited many of the other churches on the Shore, looking for a church to call home.  But he couldn't resist his calling for long.  Five years later, The United Christian Church of the Eastern Shore of Virginia was born.

Ministry reignited - the birth of uccesva

Brother Bill was called back to the Lord's work in 1988,  when he founded the United Christian Church of the Eastern Shore of Virginia in a store front in his apartment building in Parksley, Virginia. However, God had bigger things in mind and destroyed the building with a tornado.  Since Brother Bill was unable to hold services there, the church temporarily met in a store front on Cooke Street in Parksley until he built the current facility for the United Christian Church in 2000 on Parksley Road where it is housed today.  See Our History for more details about the Cooke Street location.

Brother Bill and the congregation worked tirelessly to complete the new facility.  Frank and Maxine Blake donated the property to the church and by the time the last nail was driven, the church was paid for.

Brother Bill lived to save souls for the Lord.  It was his passion.  He devoted his life to the church and to God, teaching, preaching, singing, praying, visiting and spreading the Word of God to everyone he came in contact with.  He gave God every ounce of his strength and energy and he was a blessing to everyone around.  Scores of souls were saved because he touched their lives.

Brother Bill was a talented singer and guitar player who enjoyed leading his congregations in song and holding services and visitation at local nursing homes.

Brother Bill loved to have his family with him at church.  It was of the utmost importance to him for his family to be saved and serving the Lord, but he acknowledged that it is often more difficult to win over your own family.  He would often express this by saying things like, "You work on my family.  I'll work on yours.  Together we'll lead them all to Christ."

blessed with A loving wife

Married for nearly fifty years, Brother Bill & Carolyn were the exemplification of oneness between man and wife.  It was a rare occasion to see one without the other.  Brother Bill was a dedicated husband and provider.  Carolyn was a dedicated wife and helpmate... by his side when he needed a helper, by his side when he needed a care giver.  Their love for one another was beyond measure.

finding joy in the little things

Brother Bill demonstrated to us all how to find Joy in life.  He showed us that when you serve God, you can find Joy in even the little things.  Brother Bill loved to spend time with his friends and family (including his church family).  He dedicated most of his time to the church and working for the Lord, but he also enjoyed hobbies including camping, fishing and crabbing, working in his garden and watching cowboy and western tv shows.

Brother Bill has touched so many lives and won innumerable souls for God. He is loved by so many: family, friends, church flock and many others whose hearts are broken at this loss.  We are blessed to have known him.  We are grateful to have had him in our lives and we are comforted in knowing this man of God is now with the Lord in Heaven. 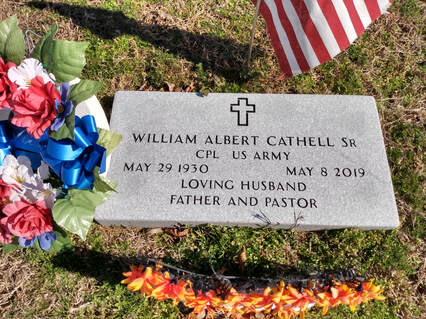 Brother Bill's military foot stone
Brother Bill dedicated his life to his God, his family and his church.  We, his church, The United Christian Church of the Eastern Shore of Virginia, dedicate this church and all that we do to God and to our beloved Founding Father.